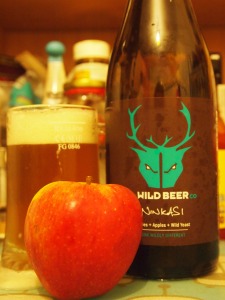 The apple of my eye!

As a lover of apples and a hater of cider, I have often wondered why somebody can’t just make an apple beer!? Then I chanced upon Unibroue Ephemere (5.5%ABV), a candy-cane sweet Belgian style apple ale last October and found that I was right – apples can make a good beer! Unfortunately this was over in Vancouver and the brewery is in Quebec so there’s little chance of finding it over in the UK. I’d almost lost hope on another apple ale until I spotted the Wild Beer Co‘s Ninkasi,(9%ABV) a very strange beast named after the ancient Greek goddess of beer. It’s a Belgian-style saison with New Zealand hops, wild yeast and Someset apple juice. If this all sounds rather zingy for you, be warned that champagne yeast is added at secondary fermentation to take the effervescent bubbles up to the next level.

Whilst I love a pretty bottle and noticed this one partly due to it’s striking appearance, I soon realized it may not have been a good idea after all. The regular metal lid was coated in wax which had been elegantly allowed to drip down the sides but there’s just one issue with this. When the wax is solid and the beer inside is potentially pretty lively, wrestling with a tough seal is a fast-track to a very beery kitchen. Eventually we ran a sharp knife around the edge and then held our breaths in anticipation as the OH gallantly prized open the lid. Thankfully disaster had been avoided. Now the main  challenge was in pouring the damned thing using the good old ‘pour half an inch then wait for the head to top the glass then subside’ method. But what a sensational saison. They were right about the bubbles! The rustic aroma has a hint of the apples and the taste is so unbelievably crisp and dry you can almost taste the crunch – there’s definitely a hint of champagne-ness. It doesn’t have the typical flavor one would expect from New Zealand hops; there’s a lot of bitterness and a hint of citrus but the tart apple is the star of the show here. It”s a world away from the candy apple Unibroue Ephemere which makes me wonder where else brewers can go with delicious apples.

Bierebelle is having another shocker of a working week dear readers. Don’t fret though. A black mood can only be cured by one thing and as we all know that can only be a black IPA! Black IPA is a relatively new phenomenon in craft brewing from over in that big ole USA. In a recent CAMRA festival programme I noticed with a little chortle that it can still only be spoken of in quotation marks. On the basis of the beers of this style I’ve been lucky enough to try, a black IPA is characterised by the same crazy levels of hoppage as American IPAs but with added complexities of dark roasted malts and a high ABV. 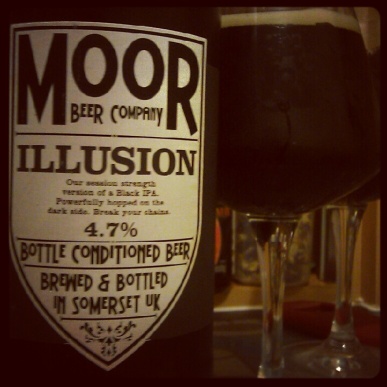 Moor Illusion, at only 4.7% ABV, is an attempt at a ‘session strength’ version of a black IPA. Sold in a generous 660ml bottle, it’s great for sharing but who would blame you for keeping it to yourself? This deep, sleek, black beer pours from the bottle with a thick head which, though short-liked, leaves an elegant white lace shimmering on the surface and sloaping down the sides of the glass as you swirl. The aroma of toasted malts and orange zest are comforting and energizing at the same time. This same toasted malts are the first flavor to hit but there’s a sweet orange-blossom honey trickling through and a tangy citrus hop with a coffee bounce at the end. It’s not quite as over-hoppy or powerful as some of the black IPAs I’ve had, but I think Illusion is perfectly joyful as a light and lovely expression of the style.