If you are out riding in bad weather, it means you are a badass. Period.

Fair-weather riding is a luxury reserved for Sunday afternoons and wide boulevards. Those who ride in foul weather – be it cold, wet, or inordinately hot – are members of a special club of riders who, on the morning of a big ride, pull back the curtain to check the weather and, upon seeing rain falling from the skies, allow a wry smile to spread across their face. This is a rider who loves the work.

As a year-round cycle commuter, out of all the Velominati’s rules, Rule 9 is my mantra. And Rule 5. But then Rule 5 is for everyone right. OK so if you believe John Ruskin then ‘sunshine is delicious, rain is refreshing, wind braces us up, snow is exhilarating; there is really no such thing as bad weather, only different kinds of good weather.’ Yes to sunshine, yes to rain, wind….oh yeah sure there’s nothing  I love more than furious pedaling to move at approximately walking-pace and snow? So pretty when it falls from the sky, how funny when it tickles my nose. Then it turns to ice. Remember that bit where Bambi’s on the ice? Yeah that’s me. Every year. Except I’m clipped into my pedals. Every year.

Saturday December 12th was Rapha‘s annual Rule 9 day for women, Braver than the Elements. In recognition of the fact that for most cyclists, winter changes our riding habits, the luxury cycling brand extends an invitation ‘to all women who ride to step out into conditions you might otherwise shy away from.’ Why just women? Cycling is still a male-dominated sport; according to British Cycling statistics there are now more than three times as many men cycling as women. It’s easy for anyone to be put off by the cold and the dark and it can be hard to get back on the bike after months off. Could ‘Braver than the Elements’ motivate women to challenge themselves to keep cycling through the colder months? 37 organised events around the world with a photo competition and wide participation via social media certainly go some way to enable a sense of camaraderie that reaches across continents, even for those riding alone.

Since there was no organised ride near me and I hadn’t summoned up the organisational skills to do anything about it, I embarked on my battle against the elements with my long-suffering boyfriend for company. With my monthly Strava Gran Fondo badge (and my pride) on the line, I was committed to 100km. Wind gusts were forecast to reach up to 40mph so it wasn’t going to be easy. Living in a city center, we are somewhat sheltered from the elements, but out on the open heath land of the outskirts of the New Forest there’s nowhere to hide. The first climb of the day, a subtle, steady grind, never worth more than three or four gear changes, became a monstrous peak worthy of inclusion in one of Simon Warren‘s top 100s. I wrestled my bike away from the ditches that the over-enthusiastic road camber seemed determined to tip me into and grinded the pedals to the summit only to be rewarded with a slight descent which demanded just as much effort as the climb. The shelter of the trees was my far-off oasis, beckoning with loving arms and whispering leaves. With streaming eyes I somehow made my way into the sweet relief of the forest. The ups and downs of the road didn’t matter now that the trees would protect me. 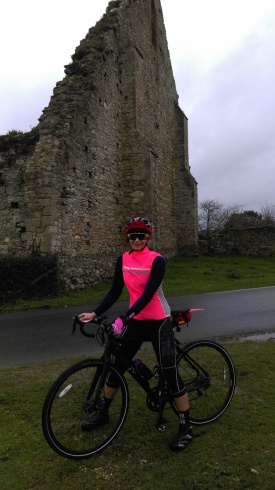 Reaching my old favorite roads around Beaulieu felt like a victory against the elements. Wiping away the tears from my windswept face, I stopped to commemorate the day with a picture at St Leonards Grange, dismounting to sidestep a rather suspicious-looking and rather large horse (I’m braver than the elements but not brave enough to risk a kicking). It was here that we saw our first fellow cyclists of the day, a club ride making it look easy. Damn them and their drafting. I don’t follow, I lead and that’s what I did. I led us round an old familiar loop feeling clever that in the direction we were going the wind would helpfully propel us from behind. How I chortled at the poor old chap struggling the other way, gripping the handlebars, head down. ‘It’s harder this way,’ he shouted. Funny. Until the next loop where I took a wrong turn and we ended up coming back on the same road. Of course I tried to imply I’d taken us the hard way deliberately. Remember Rule 5?

After several choppy loops and some exciting interactions with the New Forest’s excellent drivers, we were kindly aided on the long road home by a wind that for once was in our favor but reaching the shelter of the apartment block I dismally noted the number on my Garmin. 99.14km. In the face of adversity, failure is not an option but having faced up to the grueling wind, having come so far, my laps of the car park felt like victory laps (rather than ‘oh hell I’ve miscalculated my 100km route’ laps).

With my trusty Beast safely locked away (you name your bikes too right?) it was time for hot chocolate and a leisurely scroll through the Braver than the Elements photos from the rest of the world, feeling proud to have joined so many strong women at least in spirit for a badass ride but disappointed to have only seen two women on my local route. Watch out though New Forest – next year I’m getting myself organised and I will lead a ride, come rain or shine (but preferably rain right?) because there’s strength in numbers. 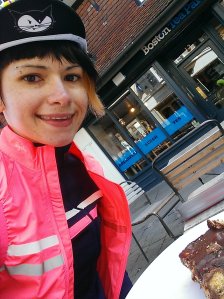 As a self-confessed Strava addict, this weekend’s long bike ride was very much inspired by the current Adventure Challenge. Just in case you’re not familiar, Strava is a fabulous app you can download onto your smartphone or synchronize with a GPS device to track your every cycle ride or run. Set up clubs or connect with friends and you can see each other’s routes and compete on segments of road or trail. Apart from my endless quest to capture those QOMs (Queen of the Mountains which, the award for fastest girl on a segment), I’ve become slightly obsessed by badges which are earned by completing challenges. They’re not even real physical badges but that congratulatory email that comes through after a long ride is (sadly) the cherry on top of an awesome day in the saddle.

To earn the latest ‘Adventure Challenge’ badge, Strava says we should go exploring and ride a route we haven’t ridden, taking photos along the way. Being the adventurous type, it sounded like an awesome idea to me so I turned to my expert navigator boyfriend and together we agreed on a 150km route (the length’s important – there’s also the Gran Fondo badge to earn!). Despite a super-chilly start, the day soon became beautifully spring-like as we sailed past bright green fields and luscious forests out of Southampton and up to historic Salisbury where we devoured delicious cakes at Boston Tea Party before heading out for the home leg. Having negotiated our way back out through the Salisbury one-way system, we enjoyed tackling one of the few notable hills in the New Forest at Blissford,  and meandered home through the pretty hamlets and villages, dodging ponies and donkeys as we went.

A good day’s riding makes for thirsty work and, as we all know, beer never tastes better than at the end of a ride. Having made a brief stop at home for food and showers, we continued the adventurous theme for the day and headed out to the new and only brewpub in Southampton, The Dancing Man. As a reluctant Southampton resident, I 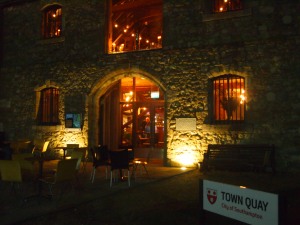 often find it difficult to find many nice things to say about the city. It’s dirty and boring and smells of wee and marijuana and for a long time there was nowhere to go to drink good beer. Thankfully, however, I now have three good things to say about Southampton. 1) we have the ridiculously tiny but incredible Butcher’s Hook 2) we have one of the best bottle shops in the country, Bitter Virtue and 3) we have the Dancing Man! Bet you wish you were here now!

When I heard the people behind the Platform Tavern (great beer but not a big fan of the entertainment because I am a killjoy) were buying the city’s only surviving medieval Wool House, I was terribly excited, not only because their beers had so far been a massive success but also because I had always been curious about the building but never been in. The Wool House was built after the French raid of 1338 by Cistercian Monks from Beaulieu Abbey and has had a variety of uses including a prison for French soldiers during the Napoleonic Wars. A building with such a rich history deserved loving restoration and the Dancing Man Brewery have totally nailed it.

Walking in it’s impossible not to be impressed by the grand wooden staircase or warmed by the inviting fairy lights and candles. The two floors have been designed with a feeling of openness whilst retaining a cozy, rustic look, perfectly mixing the old and the modern. The move of brewing production to the larger space has obviously been a success. Being admittedly a little tired from our adventures, we only had one beer each so I went for a Last Waltz (5.3%), the house black IPA which was just incredibly fresh and delicious. Just think of the big bitter hops and hedgerow berries of Brewdog’s Libertine but then imagine it from a cask. Crazy stuff and without a doubt the best real ale I’ve had in a very long time. The boy went for local favorite Vibrant Forest‘s flagship porter, Black Forest, again expertly kept and served even if it wasn’t brewed on site.

So is there anything bad to say about such a gorgeous new addition to the city? Well, there was the small matter of most of the taps being off. For our needs there was enough to choose from but for a longer session we might have been stuck but perhaps on a Sunday evening this was just a sign that Southampton is thirsty for great beer and maybe the weekend hoards had almost drunk them dry. Nevertheless, I’ll be looking forward to my next visit and having had a good look at the delicious-looking menu I’ll definitely be back for food.

Do I have to go back out there? The candles are so cozy!

Here’s where the magic happens