So I had actually thought that with all this cold weather I would find more time to get blogging. No chance! Christmas is hurtling towards us like it’s been shot from a catapult and this one may even be our last if you believe those Mayans and their crazy calendar. In fact, if the world ends on December 21st all of this running around the shops in a mad and crazy panic will all have been for nowt. Maybe the apocalypse will begin with War breaking out over the last Furby, Pestilence spread amongst cheerless shoppers shuffling through the over-crowded high-streets, Famine as the German markets close and we can no longer shovel down foot-long bratwurst and finally the Death of any chance of sobriety and sanity. 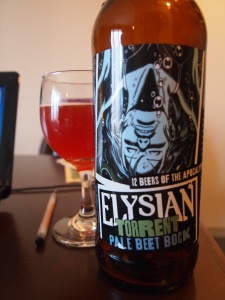 I’ve always been one to cut things fine but the deadline to finish my blogs about the exciting Craft beer from Canada could turn out to be pretty final so I’d better get on with it. Those guys at Elysian, located South of the border in Seattle, decided they would mark the End of Days with a series of 12 commemorative beers, one for each month of 2012. Their brief for their brewers was simple: which 12 beers would you brew if you knew they would be your last? Apocalyptic beer requires awesome artwork which was taken from comic book artist Charles Burn‘s fabulous Black Hole series. I was lucky enough to catch two of them whilst I was in Vancouver. The Maelstrom Blood Orange IPA was an amazing marmalade treat I enjoyed from the tap at the Alibi Rooms. The second one I got hold of was Torrent, a pale beet bock, at an off-licence and I was glad to have the bottle just for the artwork. Out of the bottle, it was the colour of the last sunset; golden red burning up the little fluffy white clouds with in glorious destruction. There was a definite beetroot aroma lifted with a touch of honey and the flavour was perfectly balanced and lightly malted with lots of proper, honest beetroot. Earthy, vegetal, deliciously bitter and incredibly dry at the end. As a beetroot juice addict, this would definitely go on my list of beers to drink as I watch the world burn!

If you brew your own brewer and like a little experimentation, the list of 12 is pretty inspirational. Which beer would you brew for the end of the world?