As a self-confessed Strava addict, this weekend’s long bike ride was very much inspired by the current Adventure Challenge. Just in case you’re not familiar, Strava is a fabulous app you can download onto your smartphone or synchronize with a GPS device to track your every cycle ride or run. Set up clubs or connect with friends and you can see each other’s routes and compete on segments of road or trail. Apart from my endless quest to capture those QOMs (Queen of the Mountains which, the award for fastest girl on a segment), I’ve become slightly obsessed by badges which are earned by completing challenges. They’re not even real physical badges but that congratulatory email that comes through after a long ride is (sadly) the cherry on top of an awesome day in the saddle.

To earn the latest ‘Adventure Challenge’ badge, Strava says we should go exploring and ride a route we haven’t ridden, taking photos along the way. Being the adventurous type, it sounded like an awesome idea to me so I turned to my expert navigator boyfriend and together we agreed on a 150km route (the length’s important – there’s also the Gran Fondo badge to earn!). Despite a super-chilly start, the day soon became beautifully spring-like as we sailed past bright green fields and luscious forests out of Southampton and up to historic Salisbury where we devoured delicious cakes at Boston Tea Party before heading out for the home leg. Having negotiated our way back out through the Salisbury one-way system, we enjoyed tackling one of the few notable hills in the New Forest at Blissford,  and meandered home through the pretty hamlets and villages, dodging ponies and donkeys as we went.

A good day’s riding makes for thirsty work and, as we all know, beer never tastes better than at the end of a ride. Having made a brief stop at home for food and showers, we continued the adventurous theme for the day and headed out to the new and only brewpub in Southampton, The Dancing Man. As a reluctant Southampton resident, I

often find it difficult to find many nice things to say about the city. It’s dirty and boring and smells of wee and marijuana and for a long time there was nowhere to go to drink good beer. Thankfully, however, I now have three good things to say about Southampton. 1) we have the ridiculously tiny but incredible Butcher’s Hook 2) we have one of the best bottle shops in the country, Bitter Virtue and 3) we have the Dancing Man! Bet you wish you were here now!

When I heard the people behind the Platform Tavern (great beer but not a big fan of the entertainment because I am a killjoy) were buying the city’s only surviving medieval Wool House, I was terribly excited, not only because their beers had so far been a massive success but also because I had always been curious about the building but never been in. The Wool House was built after the French raid of 1338 by Cistercian Monks from Beaulieu Abbey and has had a variety of uses including a prison for French soldiers during the Napoleonic Wars. A building with such a rich history deserved loving restoration and the Dancing Man Brewery have totally nailed it.

Walking in it’s impossible not to be impressed by the grand wooden staircase or warmed by the inviting fairy lights and candles. The two floors have been designed with a feeling of openness whilst retaining a cozy, rustic look, perfectly mixing the old and the modern. The move of brewing production to the larger space has obviously been a success. Being admittedly a little tired from our adventures, we only had one beer each so I went for a Last Waltz (5.3%), the house black IPA which was just incredibly fresh and delicious. Just think of the big bitter hops and hedgerow berries of Brewdog’s Libertine but then imagine it from a cask. Crazy stuff and without a doubt the best real ale I’ve had in a very long time. The boy went for local favorite Vibrant Forest‘s flagship porter, Black Forest, again expertly kept and served even if it wasn’t brewed on site.

So is there anything bad to say about such a gorgeous new addition to the city? Well, there was the small matter of most of the taps being off. For our needs there was enough to choose from but for a longer session we might have been stuck but perhaps on a Sunday evening this was just a sign that Southampton is thirsty for great beer and maybe the weekend hoards had almost drunk them dry. Nevertheless, I’ll be looking forward to my next visit and having had a good look at the delicious-looking menu I’ll definitely be back for food. 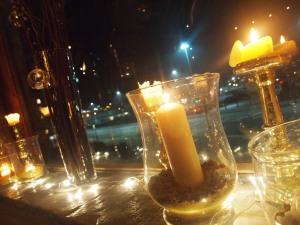 Do I have to go back out there? The candles are so cozy! 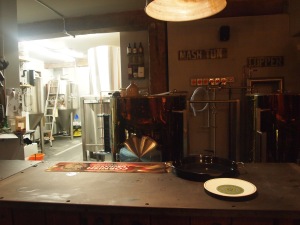 Here’s where the magic happens

Finally! The long hot summer is drawing to a close and the NFL season has begun! The majority of my Sunday nights from now till the January I will be on my sofa shouting ‘Who Dat‘ at my awesome team, the New Orleans Saints (please note – the hyperlinks will help if you are new to any of this). No football is complete without beer and some time several months ago I had a crazy idea about a beer match for each week of the NFL season. Unfortunately, down to my own disorganization and incompetence, I hadn’t quite managed to find one for every team we face but I’ll try to come up with something suitable each week to be reviewed after the game, since I am normally unable to pay attention to anything that isn’t black and gold for that 60 minutes each week. 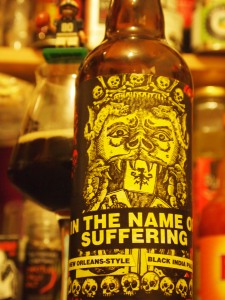 In The Name of Suffering

The opening game of the season against the much hated dirty birds, the Atlanta Falcons (which incidentally we won) deserved something special and I’ve been saving In The Name of Suffering (7.1%ABV) all summer long for tonight. It’s tagged as a New Orleans-Style Black India Pale Ale and was brewed by Three Floyds with the New Orleans ‘sludge metal’ band Eyehategod. I’m a big fan of the BIPA style and this one seems to have been touched by a bit of bayou black magic. It’s a really deep black, only glinting with a hint of brown when held up to the light and it’s topped with light and delicate tan bubbles. The aroma is simply incredible – berries and chocolate and citrus and leather and the taste is possibly the most complex I’ve encountered in this style in a while. It starts off with a hit of sharp hops which melt into rich gooey chocolate gateaux and dark roasted coffee and big malts. There’s a lasting bitter lemon and pine at the end and although the beer is pretty thin, it’s satisfyingly well rounded and sinfully sweet, leaving you with sticky lips wanting more.

I’ve been finding myself staring into space a lot recently. It’s so awesomely huge that it makes my head hurt to think about it too much but thankfully I have beer so it’s never too stressful. It’s been hard not to think about space, what with real-life Major Tom Chris Hadfield hitting the news with his performance of Space Oddity actually filmed on board the International Space Station! Then the amazing opportunity came up on Kickstarter to back the first publicly accessible space telescope, Arkyd and have a ‘selfie‘ sent up and photographed. In space! Then another opportunity on Kickstarter to support the fantastic band Ananamaguchi in their quest to make even more mind-bendingly colorful beepy awesomeness. What do they have to do with space? See their latest video Endless Fantasy and prepare to be impressed.

I was very excited when brand new Bristol brewery Rocket Science Craft Ales got in touch to see if I wanted to try some of their new beers. Well since they have such a cute logo how could I refuse. After a long day in London seeing the V&A’s exhibition celebrating the original Space Oddity, David Bowie, it was fitting to open a nicely chilled bottle of the IO (6.5%ABV) to unwind. Named after one of the moons of Jupiter studded with over 400 active volcanoes, this American IPA has a lot to live up to. It’s unfined, unfiltered and unpasturised so it’s about as back-to-basics as brewing gets. In the glass, it’s cloudy dark amber – not what I was expecting – and the aromas are fresh, sharp citrus and slightly sweet honey with a touch of pine. It’s a surprisingly really accomplished American-style pale for such a young brewery – the bitter lemons and grapefruit really hit the taste buds hard making the mouth water and the dryness at the back is so crisp, The acidic pineapple brings a touch of tropical sunshine and there’s a little sweetness in the aftertaste like sherbet lemons. 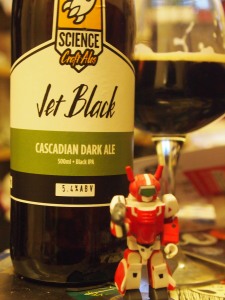 I was most excited about the Jet Black (5.4%ABV) since it’s a Cascadian Dark Ale which is one of my current favorite styles. I’m fairly particular about Cascadian Darks and very few fit the bill for me. This was a very promising pour, jet black like it says on the bottle with a lovely lasting whispy head and an aroma like a charred hedgerow. The dark malts give a burnt crust characteristic to the fabulously bitter hop but it’s lifted by a delicious fruitiness, like a playful cocktail of lychee and cranberries. This is perfectly balances with deliciously bitter dark chocolate – think of your favourite bar of 80-85% cocoa solids studded with crystals of burnt brown sugar. The finish is wonderfully dry with a bitter-sweetness that’s so moreish. I think I’ll be strapping on my jetpack and blasting off to Bristol very soon – I gotta get stocked up on these! Impressive for such a new brewery!

Bierebelle is having another shocker of a working week dear readers. Don’t fret though. A black mood can only be cured by one thing and as we all know that can only be a black IPA! Black IPA is a relatively new phenomenon in craft brewing from over in that big ole USA. In a recent CAMRA festival programme I noticed with a little chortle that it can still only be spoken of in quotation marks. On the basis of the beers of this style I’ve been lucky enough to try, a black IPA is characterised by the same crazy levels of hoppage as American IPAs but with added complexities of dark roasted malts and a high ABV.

Moor Illusion, at only 4.7% ABV, is an attempt at a ‘session strength’ version of a black IPA. Sold in a generous 660ml bottle, it’s great for sharing but who would blame you for keeping it to yourself? This deep, sleek, black beer pours from the bottle with a thick head which, though short-liked, leaves an elegant white lace shimmering on the surface and sloaping down the sides of the glass as you swirl. The aroma of toasted malts and orange zest are comforting and energizing at the same time. This same toasted malts are the first flavor to hit but there’s a sweet orange-blossom honey trickling through and a tangy citrus hop with a coffee bounce at the end. It’s not quite as over-hoppy or powerful as some of the black IPAs I’ve had, but I think Illusion is perfectly joyful as a light and lovely expression of the style.