A few months ago I entered a competition on Facebook with Specialized, one of the world’s biggest bike brands, to win a space on their women only Get Out of Town weekend. Specialized have always been a really female-friendly brand in an often male-dominated industry and seem to be doing lots to encourage women to ride in the communities where they have stores. I was thrilled to be randomly selected as one of the winners because it meant that I would be heading out to Somerset to stay with them for a weekend of gravel riding on their new adventure bike, the Specialized Diverge.

Being a bit of a kit obsessive and also scarily organised for a change, I wanted to share with you what I’ll be taking away. There’s going to be two days of riding so it’s also a really good opportunity to test out my new Kitbrix bag which has been sitting in my front room waiting for its first mission. 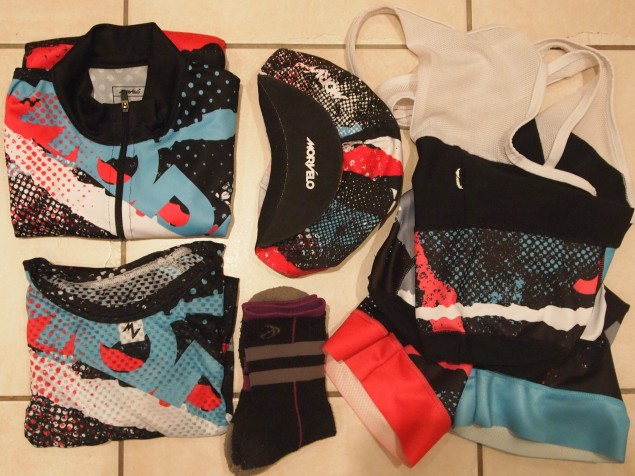 So, what to take for two days of September weather? I picked out two of my favourite kits in a sensible weight for the cooler temperatures – not super-summer-light and not super-heavy. Morvelo (left) is one of my all-time favourite brands. There’s a reason I own about six pairs of their bibs – they’ve got a pad that’s every bit as comfortable as the Rapha ones, they come in awesome prints and they have the most sensible strap design. Instead of the traditional ‘braces’ a stretchy strap goes up the middle which you can pretty much forget about. Another reason I love Morvelo is that they often make base layers to match their outfits. What they don’t make to match their outfits often enough is socks so dhb steps in and fills the void with a toasty Thermolite pair.

The Rapha outfit (right) is a bit more mis-matched and I debated with myself over whether I want to bring my Brevet jersey out. Now that I’ve decided it’s Brevet weather it’s probably getting worn to death and I’ll end up getting sick of the sight of it again but that’s a mark of just how good it is. With a zippy pocket large enough for a gilet as well as the standard three rear pockets and a front pocket for a brevet card it’s just perfect for those changeable days when you end up carrying all your various layers. I teamed it up with the matching socks and non-matching but ever-so-comfy souplesse bibs (I guess they match the souplesse base-layer at least).

You might notice that I do love a good base layer and there’s two reasons. The first is that they just make your outfit that bit more comfortable in any conditions. A good base layer is soft against your skin and wicks sweat so it keeps you dry and warm. The second reason is that I can unzip my jersey with absolutely zero self-consciousness. Any woman who rides in conventional bib shorts will know that the only (well, if you’re not a pro) way to go to the loo is to take your jersey off. Not being a fan of putting clothing on the floor of public facilities I often remove mine outside and the base-layer lets me retain some dignity. Likewise if I’m riding on a hot day and need to unzip. Base layers just make sense.

You’ll also see that each outfit has a cycling cap and regular Instagram followers might have picked up on a slight obsession. Caps are the best bit of kit ever. They can keep the sun out of your eyes, keep your head warm, keep bugs out of your hair but, most importantly, they’re just cool. You will never have too many caps. There’s simply too many amazing designs just waiting to be discovered.

How to accessorise? Well, on both days I’ll be wearing my new favourite sports bra from Odlo which is one of those stretchy pull-over ones which I thought would only be good for yoga but which I seem to be wearing for everything. Maybe not great for larger busts but suits me fine! Then, super-important, Grip Grab AquaRepel arm and leg warmers. At this time of year when mornings and evenings are cool but daytime can still be super-warm, don’t decide between shorts and longs. Just wear sleeves and legwarmers you can take off and stash in a pocket as the day heats up. These have the added advantage of being water resistant. I’m also playing safe with mitts and gloves – the Hurricane gloves will keep my hands from seizing up if it’s cold but light enough that I can stash them if I want to switch to the mitts.

So all this kit, plus helmet and shoes….will it all fit in the little Kitbrix? I wasn’t convinced, but I’m happy to report that it did with room to spare! The robust little waterproof bag quite happily zips up and I can even get a couple of t-shirts, snacks, pants and socks, small toiletries and PJs in there (I’ll wear the same jeans over the weekend)! The interior zippy compartments mean I don’t need extra bags to organise my stuff and the outside stretchy pockets will take my train tickets, purse and even my lightweight waterproof. Since I’ll be looked after by Specialized, I won’t have the usual tools and spares I would normally take for a cycling adventure but I reckon I could squeeze some in if I wanted to so I’m pretty impressed!

So I’m all set to Get Out of Town on Friday! I’ll let you know how it goes! 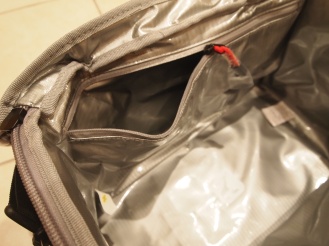 London Printworks. Once Western Europe’s largest print facility which supplied Londoners with the Evening Standard and the Metro. Now a vast events space with six rooms arranged over split levels, the original machinery left in situ. What better place for Beavertown Brewery to host the inaugural Beavertown Extravaganza.  Well, where else in London can you fit over 60 of the world’s greatest brewers, thousands of thirsty beer geeks and a double-decker bus?

For veterans of the Mikkeller Beer Celebration in Copenhagen, the format is familiar; there’s an entry fee of £55 for the session but this covers all your beer, access to all talks and seminars and the souvenir 100ml tasting glass is yours to keep.

As festival venues go, the Printworks rivals the Victoria Baths in Manchester; the original industrial features made it a memorable space and there was even a gallery where visitors could chill out and appreciate a collection of beer art. There was plenty of room to catch some fresh air and a who’s who of London’s finest street-food meant there was no chance of going hungry.

Unlike other festivals which sell tickets for half-day sessions, the Extravagnza was a whole day event which seemed to have the effect of creating a more chilled out atmosphere. Gates opened at 11 on the Saturday and the beautiful weather meant the outdoor food-court was a sociable place to wait for the main festival to open at 1. No beer available but the delicious Pressure Drop Cardamom Orange Porter ice cream from Blu Top was a pretty appropriate pre-beer treat. 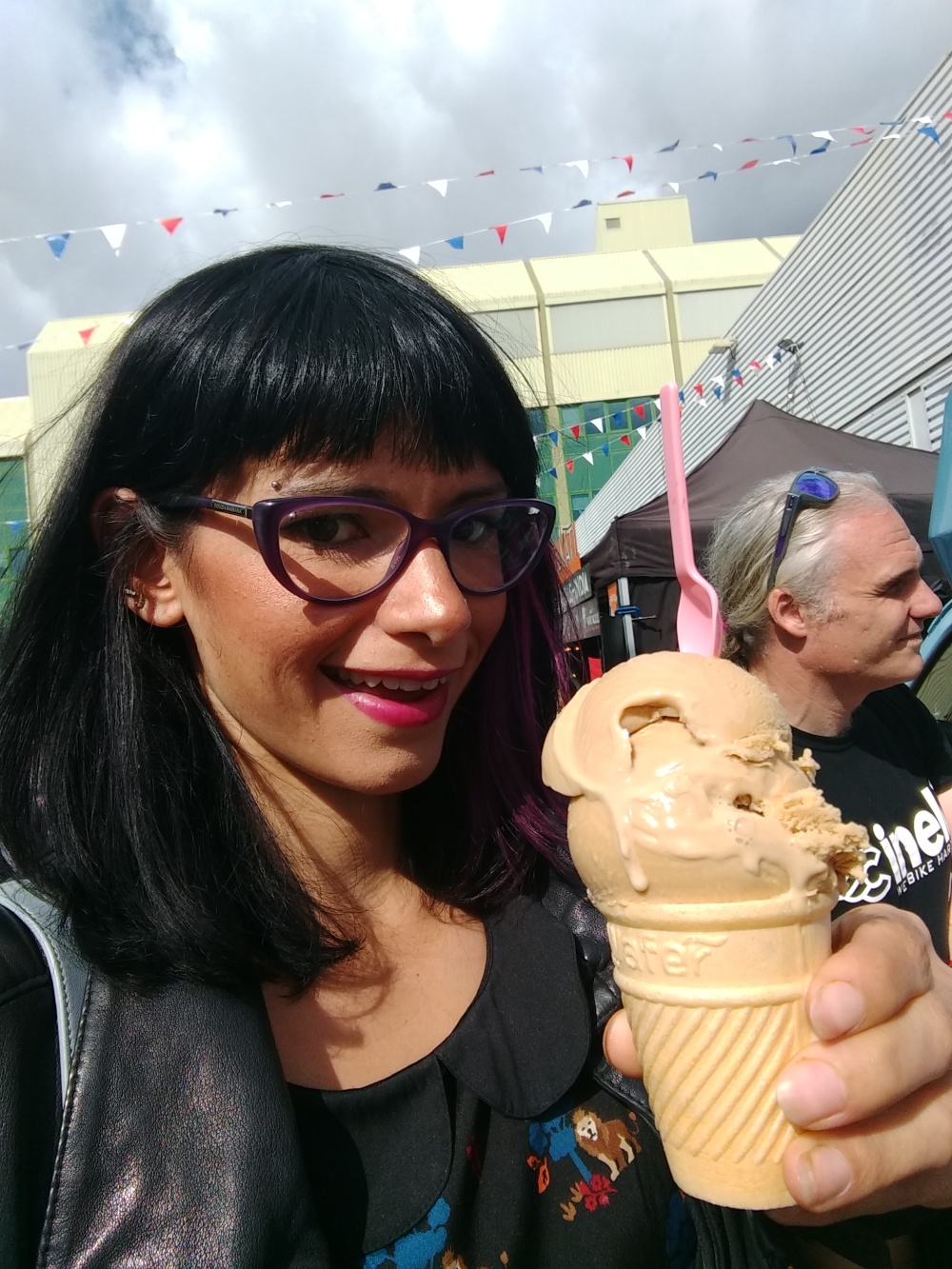 Each brewery had listed between two and eight beers for the seven-hour session and being a bit of a nerd, I’d prioritised and highlighted my favourites the night before but this organisation went out the window when I realised only two would be available at any one time. There was the usual stampede at the start with beer geeks making a bee-line for current favourites; I joined the queue for Omnipollo, always a crowd-pleaser with their soft-serve machine and masters of all manner of pudding-inspired beers. As expected, the hot tip was Trillium who had a queue stretching the entire length of the largest hall and predictably Three Floyds also drew a crowd. However, possibly because it was hard to tell what was going to be on at any time and maybe because the session was so long, the silliness died down as the afternoon went on and there was barely any queue at Trillium when I visited for the immensely flavour-packed Miles Away Sour Wheat Ale.

With so many high ABV, super-rare beers on offer, there was a surprisingly low level of drunken unpleasantness. The seven hour session seemed the perfect length to try as many beers as I wanted at a sociable pace and have time to enjoy a proper lunch of a Louisiana Crawfish roll and Halloumi Fries. Chatting to beery friends from Instagram with an empty glass in hand, I wasn’t in a hurry to dash to the next bar – I think other festivals could learn from this. And the beer itself? A perfect selection across all the styles – I can’t say there was a bad one. Well, apart from the Brewdog Paradox Absinthe Barrel Aged edition but that may also have something to do with memories of too much cheap absinthe in my student years.

A massive thanks to the organisers and especially the volunteers who ran a super-slick operation and stayed smiling throughout. See you next year!

There’s Omnipollo at the end of the queue

Always worth the wait

The beers I tried (as I remember…)