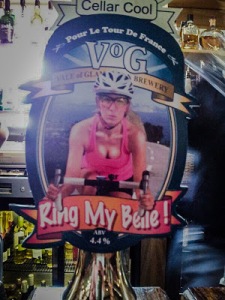 Wish I’d seen this for the last blog!

When I first started writing this blog, I made a conscious decision not to push the whole gender issue. I believe women of the world have enough inequality to worry about and for many their choice of beverage is a minuscule concern compared to other social expectations, threat of violence, the pay gap and so on. In the cozy English world I live in, I am privileged in that I can drink what I want. If you’re a woman and you don’t drink beer because that stupid advert offended you or you think nobody will fancy you and you’ll die alone, grow up. Seriously. In this day and age it’s only the twiggy real ale (see Pump Clip Parade) and boring big brands that use sexist advertising. None of this is relevant to what I drink.

I wanted my blog to be appreciated as a beer blog rather than a feminist statement and I stand by this but then I read Hardknott Dave’s recent controversial blog and was inspired to chip in. The title was ‘Beer Drinking Women Are Not Attractive’ and it turned out too hot for WordPress as he ended up taking it down. Unfortunately I only had the opportunity to skim-read it on my lunch break. I recall that I wasn’t that thrilled about his opinions, but at least he had some opinions which should be perfectly allowed and celebrated as a conversation-starter in this dreary world we live in. I wasn’t that thrilled to learn that he takes such pleasure in observing women in bars drinking beer and judging them on attractiveness. Then I thought about my own behavior at beer festivals and it turns out I can be just as bad – I challenge anybody to say they haven’t. You’ll see if you read on how generous I am about the appearance of the average CAMRA member. It’s what people do. Being looked at by the likes of Hardknott Dave as I sup my beer is the least of my worries as a female beer drinker.

Unfortunately, until recently, the realm of beer drinking just hasn’t been very appealing to women like me. I’ve always favored beer over wine as a social drink to have with friends and with food but I haven’t really felt like I belonged in the ‘pub scene.’  Despite all of its best efforts to modernize, the typical CAMRA chap still appears to be a beer-bellied, red-faced blokey bloke who isn’t accustomed to being nice or helpful to girls. How many women reading this have been elbowed and jostled out of the way at a beer festival bar by these guys, or even simply ignored? Who has had blokey noises made at them about girls drinking pints (I can seldom understand the words over the blokey noise). They can vary in attitude from slightly old-fashioned to downright patronizing. I’ll never forget the CAMRA GBBF where I went to the German bar and asked the server for his finest rauchbier. He was very quick to recommend his most favorite, then quickly started backtracking telling me I wouldn’t like it because the flavor was too strong! Same happened at one of the other bars at the same festival with another style of beer. Funny that my boyfriend doesn’t get the same advice. And then we’ll go back to the pump clips and beers with names that may well have been invented by a pre-pubescent boy. Not a world that’s relevant to me.

Thankfully beer has moved on a bit in recent years. Dave – you’ll find the good-looking girls, along with all sorts of other people at the nice craft bars and festivals. From my experience the real ale scene seems to be stuck with this weird chauvinistic crowd and that’s fine as long as I don’t have to look at it. Don’t get me wrong – I am by no means a beer snob and real ale is not the problem. I have a lot of love and respect for well-made real ale. I can’t speak for every woman out there but the problem with beer for me is the company more than anything. I don’t know what the answer is for the ‘old man pub’ scene but there seems to be a new generation of pubs and bars where everybody is welcome and that’s where you will find the beautiful women, balding men, men who look like their dogs, average women, women with beards, men who just stepped out of an Urban Outfitters shoot, all drinking beer. I’m not going to try to define it but there’s something new happening that’s accessible for all.