Hello and Happy New Year to all you awesome beery people out there! Goodness me it’s been a pretty busy year I’ve barely managed to stop to blog about any of it so this is my round-up of the best beery things from 2013 and a look forward to 2014. Bonne année!

Among the many beers of 2013 there were quite a few which stood out so it was tough to narrow it down to a top 3. Sorry to all you hop-heads but for me the dark side is still the clear winner…

I still have no idea how to pronounce this one which I encountered at Mikkeller & Friends. I found myself pining after it over Christmas. Wouldn’t it have been perfect on Christmas day with its sweet aromas of port, brandy butter and coffee and festive flavors of Christmas pudding soaked in brandy sauce and Quality Street coffee creams…

This was the beer I actually had on Christmas Day and the first I’ve ever had from The Bruery. It was at the higher end of what I normally spend on a beer so a bit of a gamble but my goodness the internet reviews were right! Unbelievably huge and awesome with those Christmas pudding fruit flavors, brandy sauce, prunes and caramel. Powerful stuff.

A totally unexpected bonus at the Indy Man was this exquisite creation by Chef Tim Anderson, with the help of his friends at Brewdog. It came as a surprise accompaniment to the pudding at the end of the gorgeous sit-down meal, also created by Anderson. Whilst I’ve almost forgotten the pudding, the beer made a huge impression. Smoke, blueberries, bacon and plenty of chewy, dark, chocolate malts.

My favorite thing about being a beer geek in 2013 has been the awesome festivals attracting the best of brewing from all over the world. There’s getting to be too many to choose from but here’s the two major festivals of this year.. 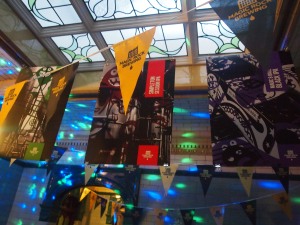 beer festival in the country. OK so the only one I’ve been to over here that you could compare for scale is the CAMRA GBBF which isn’t a fair comparison since the GBBF is full of patronizing old men and the IMBC isn’t. Instead, the IMBC was largely populated by friendly beer-loving men and women of all ages and backgrounds. It was held at the beautiful shabby-chic Victoria Baths which meant you could be served your drinks in the bottom of a swimming pool – pretty surreal. Magic Rock were given free reign to transform the turkish baths into a dazzlingly colorful bar and rooms upstairs were used to host lectures from the likes of To Øl and Wild Beer among others. There were plenty of different rooms to explore and places to sit including the old changing rooms. Guests were well catered for by a well-chosen variety of street-food vendors from Guerrilla Eats and there was even a delicious beer-matched meal prepared by chef Tim Anderson – possibly the only opportunity I’ve ever had to eat something by a famous chef! This may need a repeat visit.

So at work it went something like this….’Don’t forget I’m off next week.’ ‘Off anywhere nice?’ ‘Just a beer festival.

It’s in Copenhagen.’ ‘Errr…that’s a long way for a beer festival.’ OK so I agree that it’s a bit extreme to go to a whole other country for some beer. However, this wasn’t any beer festival. This was an international spectacular hosted by Mikkeller featuring some of the top brewers from Europe, America, even as far as Singapore. Held in a sport hall, the atmosphere was cozy but not crowded as tickets were sensibly limited. Standout beers were Westbrook Mexican Cake and Boxing Cat King Louie (Bourbon Barrel Aged) but I hear the 3Floyds offerings, including Dark Lord and Zombie Dust, were also unmissable. Shame I missed them – a mistake I will not make next year. Like at the IMBC, many of the brewers were serving at their stands and were all so happy to chat and enthusiastic. Another mark of an awesome beer festival – the food! Or rather, the cheese! The Mikkeller cheese was almost as good as the beer! OK there was other food but I still think about the cheese!

Bierebelle propped up the bar…

So there are far too many outstanding bars to mention them all and there seems to be more popping up all the time. Shame none of them are in Southampton where I live but a change of scenery is always fun yes? Here’s some of my favorites.

So I went to Copenhagen for a beer festival in May and I fell in love with the city. So I went back in October. Copenhagen is full of awesome bars and it was tough to decide on my favorite. If you’re a sucker for elegant cool and having 40 taps to choose from, you would love Mikkeller & Friends too. Peckish, try a delicious beery chocolate or sausage from their small range of bar snacks.

It was easy to pick my favorite Brewdog. OK, Camden has yummy pizza, Shorditch has special guest street food and the beer is pretty much the same at each branch but a) Bristol is the one I visit the most and b) the staff are awesome. Despite being part of a growing chain, it’s maintained a friendly, ‘local’ atmosphere.

As their motto goes, ‘Happiness is measured in schooners.’ 5 schooners seems like a good quantity and at the Hanging Bat in Edinburgh you can buy that many for £12.50 and legitimately keep the glass. Choose from any of the 6 cask and 4 keg lines. Make sure you’re hungry because you’re probably gonna be hankering after that fine barbecue food. Want Scottish? Try the haggis hotdog. Mindblowing.

Enjoying the Brighton sunshine at the Evening Star

No it’s not just a favorite because it’s close to the train station in Brighton. OK it’s small-ish but this Dark Star owned pub never disappoints with its wide cask and keg selection from the best breweries up and down the country. Expect to find Magic Rock, Brodies and Arbor regularly.

Apart from the beers (obviously) the best thing about the UK beer scene is the people and it’s been awesome to meet some of you this year. It’s like having drinking buddies in every city. Which  may be dangerous

Bierebelle still has lots to do!

It’s my new motto for 2014. It’s even on my t-shirt.2013 was pretty quiet on the blog but I’ll be taking it in a different direction in 2014. I’m planning on fewer reviews and more

editorials and cool stuff. I’ll also be taking on a few cycling challenges, some of which may even turn up on here. I’m hoping to finally get around to Dark Star’s Spin Up In A Brewery and possibly the Coast to Coast  which will inevitable earn me a few beers and who knows where else I’ll end up. The tickets are already booked for the next Copenhagen Beer Celebration and Borefts is a possibility. Any ideas…I love beer and will travel.

Thank you for reading and have an awesome 2014!