Bierebelle is a very happy girl at the moment. Happy even though it’s Tuesday, work is crackers and hayfever season is in full swing but just try to pull me down from this cloud. I finally gave in to temptation and prized open stout number 11 of the Bristol Beer Factory Christmas 12, the Imperial Stout which had been aged for six months in Glenlivet casks (then kept in my kitchen for a further 6 months). To the nose, there’s class and intrigue, dark chocolates, roasted malts and coffee bound in luxurious butter-soft leather. The aroma is intoxicating but doesn’t do justice to the fabulously full, perfectly well-rounded flavour. There’s an initial sweetness, giving way to bitter chocolate and orange peel. There’s romance, drama, many, many leather-bound books, in an apartment that smells of rich mahogany. The warming, roasty, bitter-sweet flavour coats the mouth and develops to a woody, slightly charred warmth with a subtle smoke as it warms the belly. The best way to enjoy this would surely be in front of a fire in a deep leather armchair.The brewery reccomend it as an after-dinner drink to accompany strong cheeses but since all I have is Laughing Cow Light, I’ll just have to imagine how utterly deliciously decadent that would be. Following on from the absolute pleasure of the Laphroaig Cask-aged Stout, I know I’ve missed out on a whole other world of flavour. I really have to get involved with this whiskey stuff! 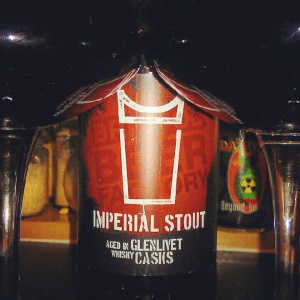